Why should you make giving to charity your New Year’s resolution?

Are you finding it hard to choose your New Year’s resolution for 2022? After another year in survival mode, it’s difficult to think about self-improvement. 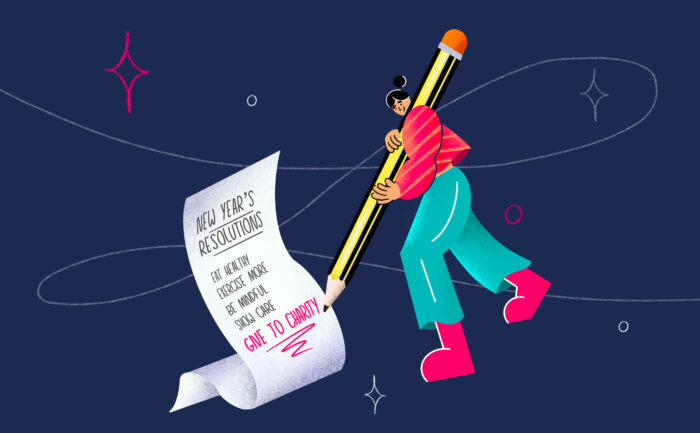 Are you finding it hard to choose your New Year’s resolution for 2022? After another year in survival mode, it’s difficult to think about self-improvement. Among the UK’s top New Year’s resolutions for 2021 were losing weight, exercising more often, and following a healthier diet. These are admirable resolutions, but we all know how tough it can be to keep them. Nobody likes turning down a slice of cake. So, what could you resolve to do instead that you might find easier to stick to than a new diet?

One resolution you could think about is a regular donation to charity. There are lots of benefits to giving, not only for the people your money will help but for you, too. So, why should you make donating to charity your New Year’s resolution this year?

Your donations will change people’s lives. It’s a big statement, we know. But it’s true. Fundraising has been hit hard by the pandemic and charities need our help now more than ever; especially smaller, local charities who rely on public donations to provide their services. And with regulatory bodies such as the Charity Commission and directories such as Charity Choice in the UK, it’s easy to find out exactly how charities spend your donations.

Most charities dedicate a section of their website to explaining how your donations will help the people who use their services. This gives you a real understanding of the difference your money will make to someone, whether it’s a child getting back into the classroom or a terminally ill patient receiving respite care. It helps you to picture the invisible thread that connects your donation with someone getting the support they need.

The pandemic has been tough on everyone, and almost every sector has been impacted in some way. While it’s been inspiring seeing the public come together and support each other throughout the pandemic, the not-for-profit sector has still suffered, with 60% of charities in England and Wales reporting a loss of income. This means that the people these charities help will have suffered too, because a lack of funds and volunteers means a lack of services, and there are people who are entirely dependent on these services to survive. Regular donations will help charities get back on their feet again, and get back to doing what they do best: supporting the people who need them.

But it’s not just the charities and the people they help that will benefit from your regular donations – you will, too.

It’s good for you

We’re not saying that following a healthy diet and being more active isn’t going to be good for you. But research has shown that giving to charity can be really good for you, too. And you might find it more enjoyable than giving up chocolate.

‘Helper’s High’ is a term that was introduced by wellness expert Allan Luks in the 1980s and is still being used by researchers today to describe the euphoric feeling that follows an act of kindness. This is the idea that engaging in voluntary behaviour, such as donating to charity, can make you feel happier. Luks conducted a study of over 3,000 people and found that helping others reduces stress and releases endorphins, concluding that regular helpers are 10 times more likely to be in good health than people who don’t volunteer. “Volunteering definitely makes me happier”, says Penny Coulthard, volunteer at Givto. “I really like using the skills I’ve developed in my working life for something that has purpose and where I can see the impact.”

Giving time to a cause isn’t an option for everyone. We have so many demands on our time, especially against the current backdrop of a pandemic: we’re balancing working from home, or on the front lines, with caring for our families, catching up with our friends, recovering from illnesses, and somehow still trying to relax from time to time. Luckily, the mood-enhancing benefits of volunteering apply to donating money to charity, too. Research has found that spending money on other people, as opposed to yourself, can boost your overall happiness.

It strengthens your connection to your community

Do you know your neighbours by name? If you don’t, you’re not alone: a survey by the Eden Project found that 40% of Brits don’t know the names of their neighbours, and a staggering 1 in 5 people don’t feel that they could call on anyone in their neighbourhood if they needed help. It’s difficult to believe how disconnected we are, given that we’re living in an age of constant communication through social media, but with 25 million people in the UK reporting that they feel lonely, we can’t ignore the problem.

One proven way of strengthening your connection to other people and tackling those feelings of social isolation is by giving to others. Giving makes you feel good, and receiving feels good too, so naturally a social interaction where both parties come away feeling good is going to have a positive impact on the way we feel about each other. Even when the social interaction is through a third party, such as a charity, you still come away feeling more connected. “I’ve just moved to Manchester and started working in Leeds,” says Laura Mitchell, Givto volunteer. “Learning about new causes through Givto has made me feel closer to the community I now live in.”

Giving to charity means that you are directly impacting someone else’s life in a positive way. Thanks to your kindness and generosity, someone could have a place to sleep for the night, or a much-needed counselling session, or their first hot meal in weeks. When you look at it like that, don’t you feel a little more connected to the world around you?

So, go on. Make giving to charity your New Year’s resolution this year. It could be the most fulfilling resolution you’ll ever make.

Are you looking for a new way to give to charity? Read more about how Givto works here: https://givto.org/how-it-works/

How can Givto help you make giving to charity your New Year’s resolution?

Why should you make giving to charity your New Year’s resolution?